Twenty years ago, 17 software engineers and self-described ‘organisational anarchists’ met at a Utah ski resort. Frustrated with what they saw as the ponderous, bureaucratic processes guiding software development at the time, they strove for a simpler, leaner alternative. The result was the agile manifesto, which laid out the following principles:

While they saw value in the items on the right, they considered the ones on the left more critical. They hoped adopting these principles would help teams move away from monolithic, unchanging plans and ‘big bang’ releases instead of delivering continuous incremental change. This approach would (they hoped) allow teams to benefit from early feedback and change direction when necessary before the teams had wasted too much time.

Far more teams claim to practice agile than actually do so effectively, and an entire industry of expensive agile consultants has sprung up to milk the enterprise cash-cow. However, much of this industry dedicates itself to applying ‘agile’ branding to existing waterfall practices, changing very little (save the respective bank balances of said consultants).

Many teams practice (or claim to practice) Scrum, an Agile methodology that organizes planning cycles into discrete sprints, typically two weeks long. At the beginning of the sprint, a team estimates the work it believes it can get done. At the end of the sprint, the team evaluates how well it did and adjusts its estimates for the next sprint accordingly. This way, at least theoretically, the team can deliver progress indefinitely at a sustainable pace while allowing stakeholders to track its progress. 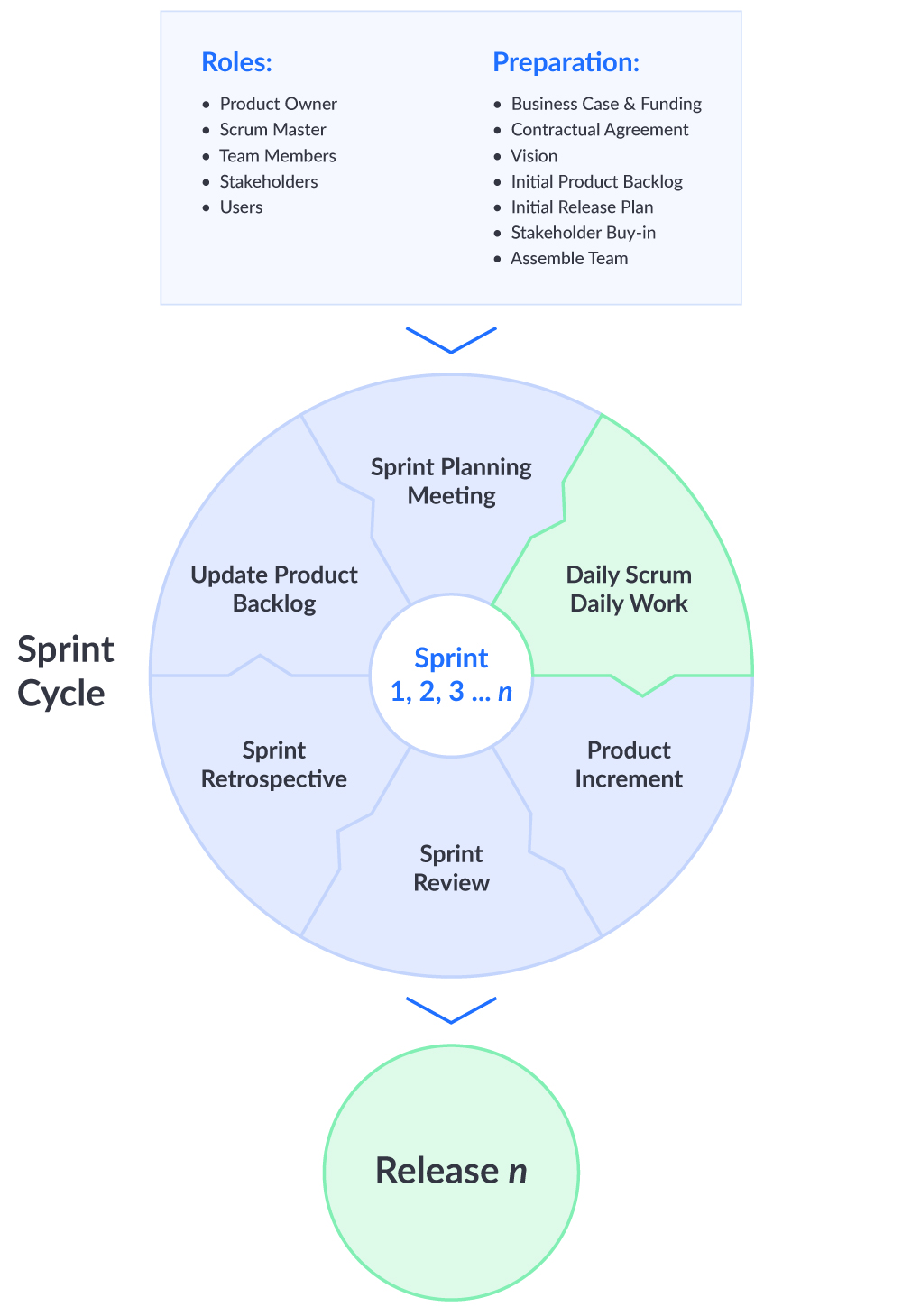 Scrum embodies the tension between responding to change and following a plan. Because the sprints are relatively short, a team is free to change direction with relatively short notice. However, the existence of sprints and the prioritised product backlog provides teams and stakeholders with an overall plan (albeit one subject to change) and mitigates against the disruption caused by too many changes of direction in a short time.

A common mistake made is confusing planning cycles with delivery cycles. In Scrum, a sprint represents a discrete unit of planned work for the team. It does not denote a single delivery - the best performing teams deliver, respond to failure, and successfully recover multiple times a day, as the following table shows: 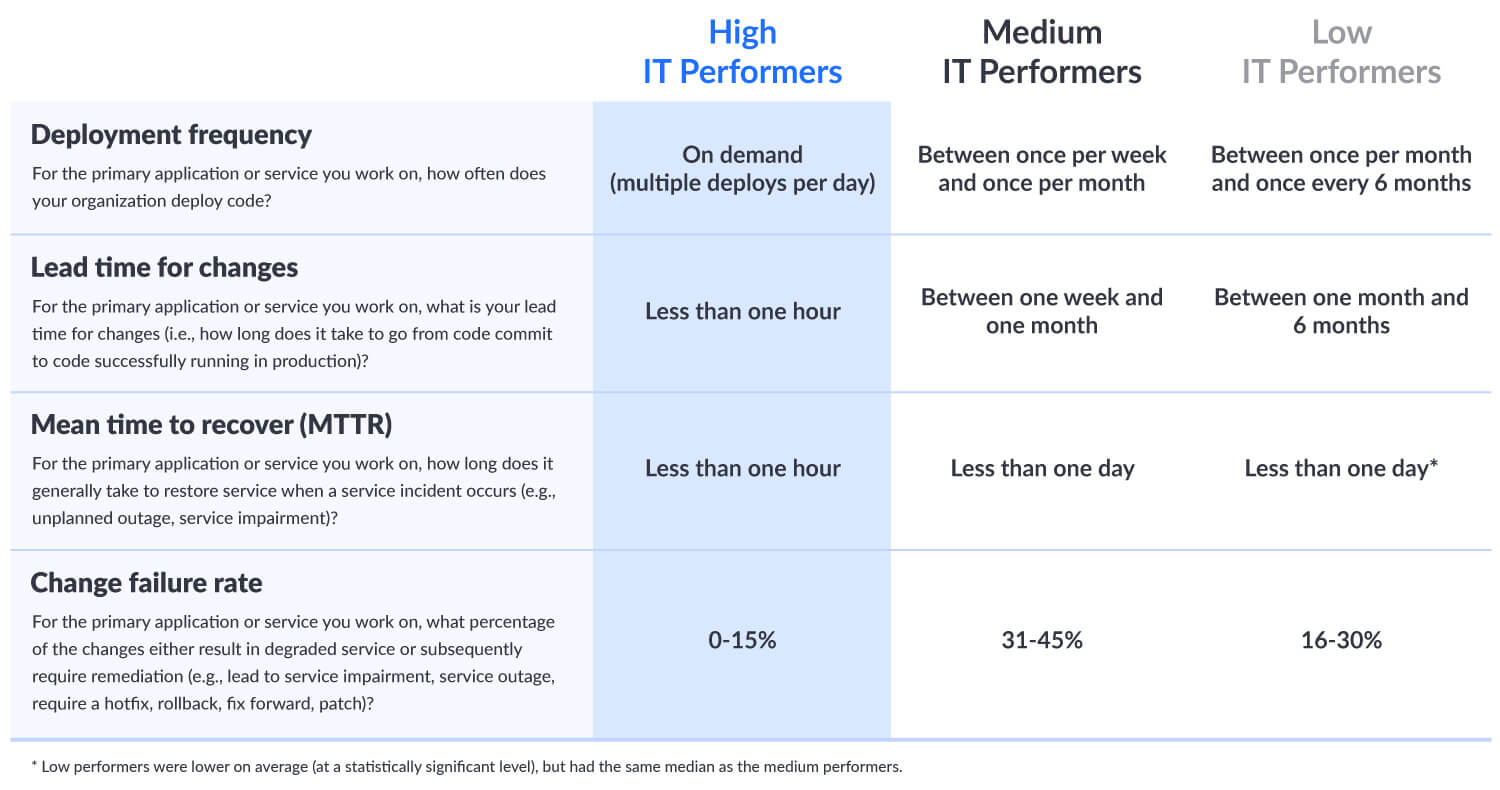 Why are these metrics important to agile delivery? Suppose a team brings changes to production multiple times per day (deployment frequency and lead time for changes). In that case, it is by definition delivering frequent, incremental change, enabling it to garner rapid feedback from stakeholders (addressing the responding to change and customer collaboration parts of the manifesto). To do this safely, it needs to trigger as few incidents as possible (change failure rate) and close them quickly (MTTR).

The simplest way to minimise the lead time for changes, MTTR, and change failure rate is to make changes as small as possible and then test and deploy them as quickly as possible. This approach requires the team to concentrate on a few things.

Each PR should encapsulate a single deliverable. Huge PRs spanning dozens of files are hard to review and test, take longer to be ready for deployment, and are more likely to contain errors. A few common mistakes include:

Creating regular, small PRs is pointless if they’re lying around waiting for reviews for days. Moving PRs along should be a priority for a team - no PR should be stuck for more than an hour waiting for feedback. Teams can speed up PR reviews in a few ways:

Perform a full regression test before each release

No matter how much effort you put into writing clean, well-tested, loosely-coupled code, the real world always gets in the way. Perhaps you’re integrating with a particularly unreliable third-party API. Maybe your service is a small part of a complex ecosystem. But frequently, changes to one part of the system have unexpected effects on other parts. To keep your change failure rate under control, it becomes essential to test the critical components of the system - to perform a regression test:

Each environment, test suite, and deployment process has its pain-points. The only way to know what they are is to measure them. Keep track of how much development time each release takes (along with the principal pain-points), which bugs crop up in production regularly, how long the tests take to run and how often they fail randomly. If possible, automate this data-collection via integrations with your production monitoring tools, CI pipeline, and source control system, and turn it into a set of KPIs for your team.

The agile manifesto encourages teams to deliver continuous, incremental change, gather rapid stakeholder feedback, and course-correct accordingly. Teams can optimize their development processes to this end by focusing on DevOps metrics around deployment, recovery, and reliability. Above all, teams must continuously measure their performance and seek continuous improvement.